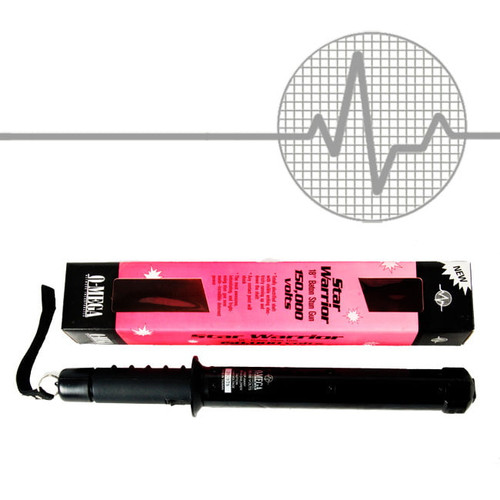 Omega's incredible STAR WARRIOR STUN GUN BATON is the best of all that is available! It features a new futuristic 21st century design and technology. It is ferocious and will take an assailant down! The Star Warrior Stun Baton is used by law enforcement professionals, soldiers and animal control experts around the world. There is nothing comparable to this stun baton! It is truly awesome, frightening and intimidating. It puts out 150,000 volts, in truth (many other companies advertise high voltages but they are simply deceiving the buyer).

O-Mega designs our Stun Guns for maximum AMPERAGE. We are the only company with a through medical report by Dr. Robert Stratbucker, M.D., Ph.D., who has informed us that voltages above a true 150,000 volts could cause a brain embolism, and cause death. Please see our report. The most incredible stun baton manufactured! The 19'' Star Warrior stun baton has 150,000 volt arcs running up and down the entire unit above the handle. It is an awesome sight! You can hit the assailant from any angle and he will go down with this stun baton. This unit has also been featured in several movies including "Judge Dredd," "Demolition Man," "Con Air" and "The Last Boy Scout".