have the most psychological influence out of all the self-defense products. This devastating impact weapon will have a bad guy on the ground, rolling in pain. A less-lethal option capable of becoming a deadly weapon.

As Teddy Roosevelt once said, "Walk softly but carry a big stick." Clubs have always signified brute force, but also as a powerful symbol of law enforcement. The expandable baton, also known similarly as a collapsible baton, telescopic baton, sap, truncheon, nightstick or blackjack, has evolved from the time in when British police officers in Victoria era London first began using billy clubs on their belts.

Overall, the expandable baton is an excellent less-than-lethal option for self-defense due to its portability, effectiveness and psychological impact on targets. However, it is important to understand that in most jurisdictions throughout the U.S. expandable batons are legal only in the hands of law enforcement. There are very few states that allow them for civilian use. Please check out the expandable baton laws section in order to gain further information for your particular area. Check with local law enforcement or an attorney if you are unsure.

We supply a variety of automatic expandable self defense batons: 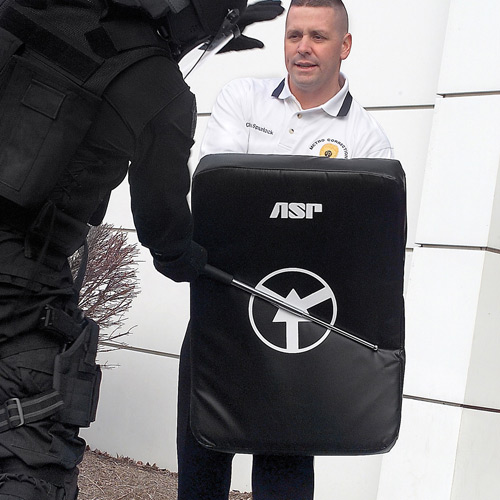 Types of Expandable Self Defense Batons

There are a few different brands of baton, but by far the most commonly known is the ASP baton made by Armament Systems and Procedures (ASP, Inc.). Expandable batons come in three different formats: friction-loc, lever-loc and disc-loc.

Friction-loc Expandable Batons – The most common type, friction-loc batons close through impact on a hard surface, such as concrete.

Disc-loc Expandable Batons – This variation is the newest and by far the easiest, closing at the push of a button. The ASP Air Talon is a good example of this. Disc-loc batons are excellent in environments where access to a hard surface is not available (e.g. water, sand, etc.)

Expandable batons are placed higher on the "use of force continuum," which law enforcement primarily uses for addressing varying threat levels based on a particular situation, than other less-than-lethal options such as pepper spray or TASER devices. While pepper spray and electronic control devices rely on involuntary closure of the eyes and contractions of the muscles, the purpose of the expandable baton is to gain compliance from a subject through pain. This is done by striking specific parts of the body, such as the arms and legs.

Our budget option would be the Expandable Keychain Baton. It is accessible on your keychain, fairly good quality and great for reacting quickly to a threat. This is a friction-loc baton.

We recommend getting the Smith & Wesson Tactical Expandable Baton. Great quality, excellent handling and comes with its own holster for carry. This is a friction-loc baton.

Our premium option would be the ASP Talon Baton. As a disc-loc baton, you can easily retract the baton with the push of a button; no banging on a hard surface required! ASP batons are of superb quality, and the ASP Talon is no exception. The best we can recommend for police and security personnel.

Expandable batons should be handled carefully as they are considered a “dangerous weapon” due to their ability to cause significant physical harm. NEVER aim for the head, groin area, or chest. Doing so could put you in legal jeopardy. Appropriate target points are joint areas such as the arms and legs. It is highly advised to receive expandable baton training before deciding to purchase for self-defense purposes.

Have baton weapon questions? As a local small business, we always have your back!

With these self defense tools and products at your disposal, you can effectively protect you and your family.

From sourcing and supplying only the best automatic expandable batons, to making sure that we cater to your needs. Send any questions you have to support@srselfdefense.com or contact us for assistance.