What would you prefer to have in an altercation: a gun or a Taser? Both offer a wide range of benefits and disadvantages. While I know most of you will say ‘the gun’, let’s have a look and review the pros and cons of both weapons to make sure we draw the correct conclusion.

Why do we need to debate this? Well, with the number of accidental shootings on the rise in the US , I think it’s best we think our self-defense decisions thoroughly. I know that the firearm seems like the safer and far better option, but there are also lots of disadvantages. So, if you want to make sure you take the right decision take a look at the points below.

The Action Range of Handguns and Taser Guns 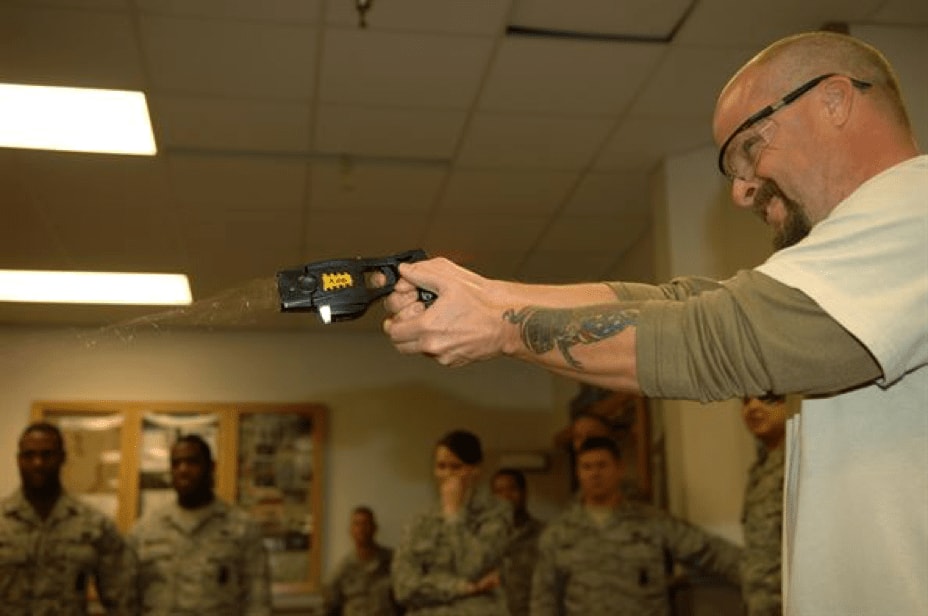 Both guns can be shot from a distance from the attacker, but the pistol has the upper hand in this situation. The Taser is effective at a range of about 15 feet while the firearm can hit a human-size target from a distance of about 50 yards (100 if you are a skilled shooter).

Still, in order to protect yourself with the handgun, you must have ammo and you must know how to shoot the weapon. This means at least several hours of practice. On the other hand,  Tasers and other electroshock weapon devices are easy to master while being less heavily regulated than firearms. If you are looking to protect yourself in a situation using the shock power of tasers, stun guns and other electroshock devices it's important you understand and learn how to properly deploy your weapon. 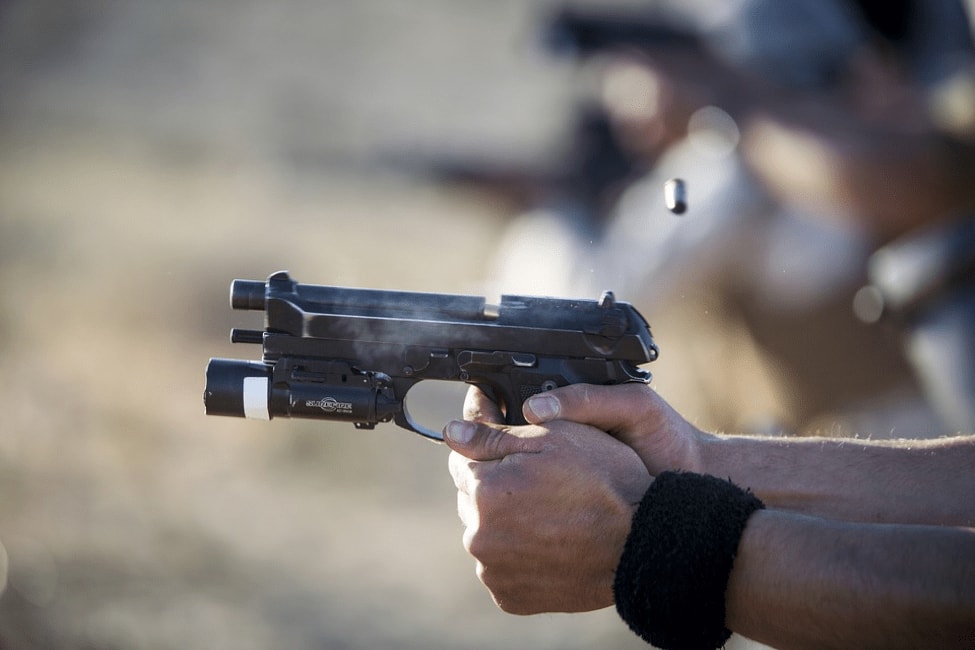 The sound of a gun firing is loud and, if you’re not used to it, it can make you lose focus. If you’ve only fired at the shooting range, wearing ear protection, then you don’t really know how the gun sounds like in a close quarters situation.

The Taser is quite silent as all you’ll hear is the sound of the electric arc going through your attacker’s body, but this is not loud compared to a gun. This makes it a lot easier to use and keep greater focus in a very troubling situation.

The First-Sight Impression of Tasers and Handguns

In many respects, a pistol is more impressive compared to a Taser. One disadvantage, however, is that an unarmed attacker can take advantage of the situation if he or she senses hesitation in your ability to pull the trigger. The Taser, on the other hand, is a non-lethal alternative that has widely recognized "shock value" and can be used multiple times in succession without permanent damage. When faced with the Taser, a criminal will know that you mean business. They will be more likely to respond to your commands and back-off.

An important thing to remember is the Use of Force Continuum when addressing a threat. The problem with a firearm is that it sits at the highest level of force: lethal. If you start with this, there is no room to go down. Starting with a less-lethal option like the TASER is the best course of action legally, as it gives you the ability to move up as necessary. A firearm should be used when dealing with a threat utilizing lethal force, such as a knife, gun or any other weapon that can cause serious bodily harm or death. 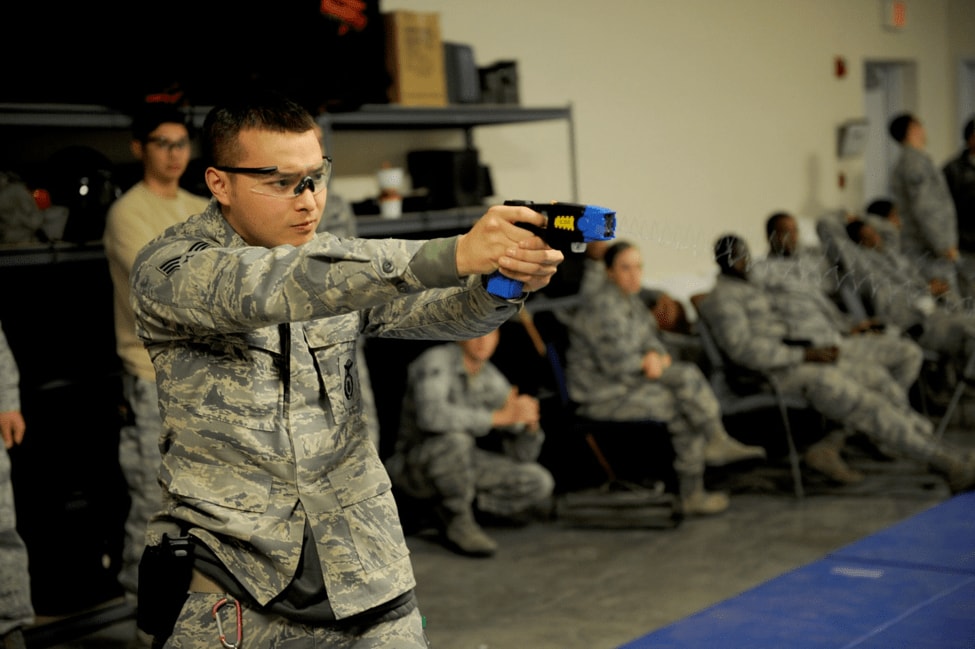 A quick browse on Goog Gun will tell you that pistols are a lot of fun regardless of their model and the ammunition used. Still, they are only fun when used in a controlled environment, like a shooting range, where you know what to expect. In case of a self-defense situation, a lot of things can go bad and the action of a firearm is deadly.

If you’re not trained to react in high-pressure situations, you can only graze your attacker and anger him/her before you can take another shot. Or worse, you may miss and hit someone else, adding a bystander to your victim count. Is this something you want on your conscience?

The Taser features non-lethal action that completely incapacitates your attacker giving you time to run and hide or call for help. When you hit someone with the two darts, an electrical current is activated through the attacker’s body, causing involuntary muscle contractions. However, there is no permanent damage to the incapacitated person so, if you hit someone by mistake, you won’t have to worry about his/her health. Put shortly, this happens because Tasers provide high voltage with low amperage, but you can learn more about them here.

As I mentioned above, with a firearm you risk killing someone, which is pretty huge in my opinion. You also risk not being allowed in certain buildings or public spaces and the loud noise of a gun firing can attract other ill-intentioned people before help arrives.

The only risks you have with a Taser gun is missing your target (both electron barbs must be attached to your attacker) and the low likelihood of it not working (no device is full-proof, not even a gun). This is quite important, so make sure to practice your aim before you start carrying a Taser as a self-defense weapon. However, Tasers also have a backup direct contact stun gun built-in just in case you miss the target. Do not become overly reliant on one device; always have a secondary tool available just in case.

As you can see, both guns come with risks, but you must choose the one with less and that is the Taser. You don’t risk killing anyone (by mistake or intentionally) and the Taser is easy to carry around everywhere you go. The Taser is the better choice when it comes to self-defense as a civilian.

To get a full rundown on TASERs, check out the  Electroshock Weapons: Stun Guns & TASERs course at Stun & Run Academy.