With any luck you reached this page through the stun guns product page section. Good job for checking this info out! It will be immensely important when deciding whether or not to purchase a stun gun for self-defense.

Here's an in-depth breakdown of myths and facts surrounding stun gun devices and electroshock weapons for self-defense (a reference chart is provided at the end): 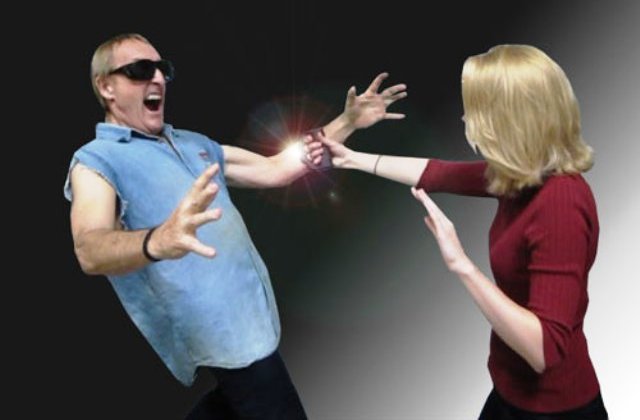 This is probably the most prominent stun gun myth. Unfortunately, the industry is unregulated. This gives manufacturers the opportunity to make outrageous voltage claims when marketing their products.

What will 4.9 million volts do to a person?

Any company that is claiming to sell you a 3, 6 or 10 million volt stun gun is blowing smoke. It's simply impossible to generate that kind of power through such a simple device.

People have been fooled into believing the higher the voltage, the more powerful it is. While voltage does matter to some extent, what these companies do not tell you is that amperage, not voltage, is what makes stun guns effective. Amperage (or amps) represents the current or flow of electricity going through the device.

IMPORTANT: When purchasing a stun gun, ALWAYS remember to buy from a reputable brand. We specifically recommend Omega and ZAP stun guns because of their commitment to using high quality components. You can't go wrong with either of these.

You've probably seen it in the movies. Some guy gets the slightest touch of a stun gun and immediately drops to the ground. Right? WRONG. Unfortunately, these electroshock devices and weapons simply do not work that way.

Can a stun gun knock you out?

No, neither a stun gun nor a TASER device is designed to knock someone out or render them unconscious. These devices work by locking up the body's muscles by "jamming" the electrical signals of the central nervous system. Once the stun gun or TASER stops cycling, the affected person is able to move again.

Do stun guns really work then?

They work, but for pain compliance. Normally 1 second of stun gun contact will repel and startle an attacker. A 1-2 second shock will cause minor muscle spasms and put your attacker into a dazed mental state. 3 to 5 seconds will cause a desired loss of balance, muscle control, mental confusion and disorientation/nausea.

Some people think that using a stun gun on someone and then touching them will cause the electricity from the electroshock device to arch back from them to you.

This is not the case at all. If this actually were true, there would be too much liability involved for these devices to even exist in the marketplace. Upon impact with the skin the muscles take in the energy from the stun gun, making it impossible for the electricity to convert from them to you. The only way something like this could happen is for you to be zapped by a power line or some other type of electrical device.

Myth #4 - TASERs and Stun Guns are the Same Thing

In the news and on online channels such as Youtube you will often hear a stun gun being referred to as a "taser" or "tazer", or vice-versa. The word "taser" has evolved into the common lexicon much like the words "jello" or "kleenex."

People have associated it with electroshock weapons for self-defense, specifically stun guns. The TASER represents a brand of electronic control device (ECD) that immobilizes a target for several seconds by overriding the central nervous system via neuromuscular incapacitation. Tasers execute this through the use of barbed dart cartridges that can shoot up to 15 feet away from a target.

They do not rely on pain to work, simply working by jamming the electric signals going through the body. The TASER works as a stun gun as well, via "drive stun" mode, when a cartridge is not inserted. The stun gun on the other hand is a direct contact device that relies pain to work. It is first and foremost a pain compliance tool.

As always it is important to remember that anything can fail. The same holds true for a stun gun or any self-defense electroshock weapon. Since they are pain compliance tools, it is not recommended for use against people with a high tolerance to pain. That includes those under the influence, on drugs or mentally psychotic. In these instances a stun gun will only serve to make the attacker more aggressive and potentially go into "kill mode."

Stun guns are also not very good for women, particularly those who are not physically strong, as they can be taken away and be used against them. There are, however, models that have a wrist strap that will disable the device if it is pulled out.

All in all, like any other self defense product the stun gun is merely a tool for keeping you safe. It is always best to have a back-up plan or product (like pepper spray) to help you in times of crisis.